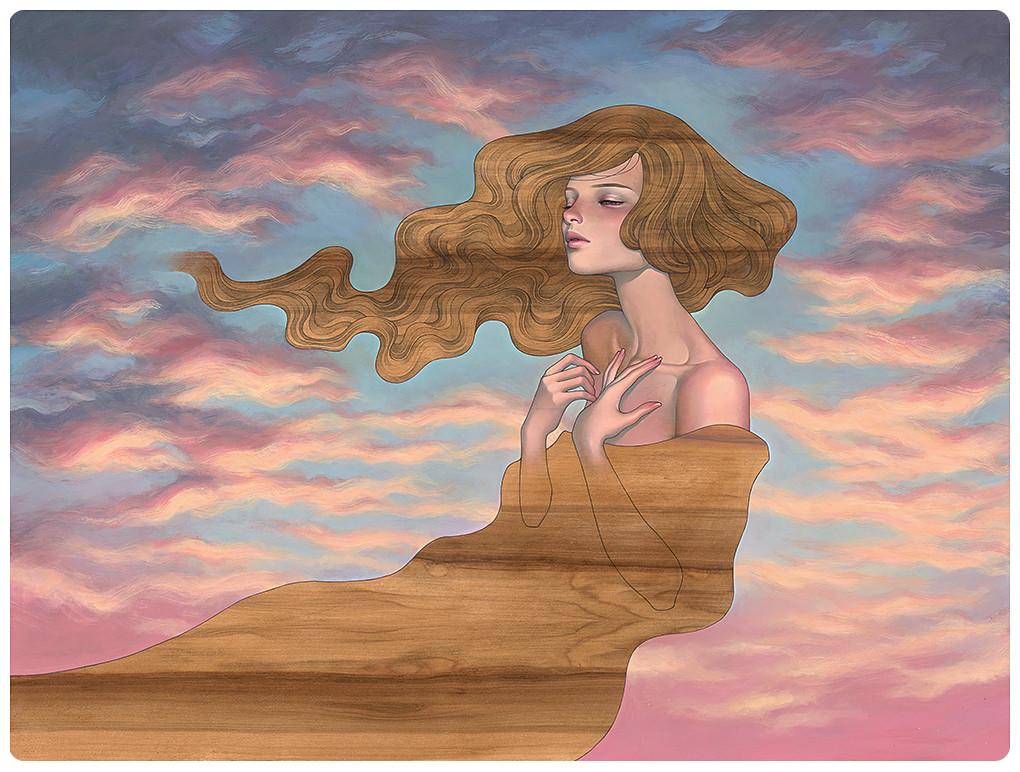 Not only general public, but also many futurists and sci fi authors often perceive the predictions of thousand years a bit far fetched and impractical.

How can anyone anticipate something knowing they will be long dead? Well, they can’t.

However, there exist a group of people who know they can take control of their life and decide their destiny. Transhumanists believe Death can be beaten. This is precisely why they can clearly and boldly articulate the future thousands of years from now.

Even if you live for centuries, how can you imagine something you have never seen before? Not unless you perceive the surrounding to be the only objective reality. To see in the future is to unlearn what you have learnt to be the norm and work towards building the future you believe in.

Imagine witch burning or slavery in XXI century. You can’t? Now imagine a world devoid of cruelty, envy and death, the world of eternal bliss and love. Fairy tales, you will say!

Not David Pearce. He believes and knows people can do better than they can imagine. And we are moving towards this world. It is only few centuries away…

What exactly this New Brave World will hold for us in a millennia? Get on the ride.

According to David Pearce, the founder of the hedonistic Transhumansim, by year 3000 people would be able to overcome misunderstandings and grief and engineer a state of superhuman bliss by the means of psychedelics, stimulants and genetic engineering. Already now we are able to quickly tweak autumn blues and major depression disorder by skillfully mixing several magic pills from the pharmacy. With the advances of neuroscience and understanding of human mind the possibilities to push the hotspots of pleasure will become limitless.

More strictly, indefinitely extended youth and effectively unlimited lifespans. Transhumans, humans and their nonhuman animal companions will not have to grow old and decrepit. Automated off-world backups will allow restoration and “respawning” in case of catastrophic accidents. “Aging” would exist only in the medical archives and among fundamentalists opting out on the Immortality Option.

Due to an unrestricted development of technology, in a millennia or so we would be able to observe a flourishing ecology of sentient nonbiological quantum computers, Artificial Intelligences and transhuman “cyborgs” all across the Solar System.

“Magic” will exist all around us, most importantly the one we choose to see. “Augmented reality” of earlier centuries would have been largely superseded by hyperreal Virtual Ecosystems full of laws, dimensions, avatars and narrative structures wildly different from ancestral consensus reality.

Just as today we are able to conceive things, possess human will and be self-aware in several centuries from now the whole new fundamental categories of mind would have been discovered via genetic tinkering and pharmacological experiment. Gene-editing tools will open up the modes of consciousness that make the weirdest human DMT trip akin to watching paint dry. Any suffering or “bad trips” would be physically impossible because anything below “hedonic zero” will dive into the dustbin of history.

“How long will this last, this delicious feeling of being alive, of having penetrated the veil which hides beauty and the wonders of celestial vistas? It doesn’t matter, as there can be nothing but gratitude for even a glimpse of what exists for those who can become open to it.”

The intensity of everyday experience will surpasses anything we can imagine nowadays. The brain as a world processing mechanism will be reprogrammed and enriched by net-enabled neurons. As the “mind” would not be restricted to the captivity of human scalp and all memories and information would be interconnected and freely stored in Galaxy-spread data bases, we would be able to finally achieve a previously unthought of objective reality and omnipresence.

Homo Sapiens on XXI century will resemble sleepwalkers in comparison with a Transhuman of fourth-millennium.

Just as witch burning and slavery are inconceivable to a human being in XXI century, the conscious infliction of suffering onto another living creature will be considered unthinkable to the Transhumanists of the Fourth Millennium. Factory-farms, slaughterhouses and other Darwinian crimes against other sentient being would have passed into the dustbin of history. Omnipresent AIs will perform as representatives of all species and care for the vulnerable species through the means of “high-tech Jainism”.

In the year 3000 there will be no need for competition or fight for resources. Extreme violence and useless suffering will be long gone. In the year 3000, fertility regulation via cross-species immunocontraception will replace predation, starvation and disease to regulate ecologically sustainable population sizes in utopian “wildlife parks”.

Humans will be able to finally understand what the Garden of Eve was all about. Our tenacity and perseverance would finally return humans to the long deprived paradise of happiness. The free-living descendants of “charismatic mega-faunas” will graze happily with neo-dinosaurs, self-replicating nanobots, and newly minted exotica in surreal garden of edens.

Every cubic metre of the biosphere will be freely accessible to benign AI supervision. Other idyllic biospheres in the Solar System would be programmed from scratch by the Transhumanist design of Eternal Bliss.

9) The Quest for Meaning is Resolved

Problems of developed world, – the ironic saying we hear now and again. In fact it is hard to imagine more depressed and lost society as the one of XXI century.

People who have terminal diseases and lack limbs or sight are suffering from an inability to take the full variety and pleasures of life. Equally, completely healthy and adept human beings are found in s transe of absolute depression and apathy to the beauty and offerings of the world. On the other extreme, people with bipolar disorder experience megalomania and messianic delusions when uncontrollably manic.

Hyperthymic civilization in the year 3000 will record no such pathologies of mind or deficits in meaning. Genetically preprogrammed gradients of invincible bliss will ensure that all sentient beings find life and themselves inherently valuable and unique. Transhumans love themselves, love life, and love each other.

Status goods will persist in basement reality for a significant time, as well as relics of the cash nexus on the blockchain. Thanks to breakthroughs in nanotechnology and the discovery of numerous new materials and the ways of extraction, any scarcity will be foregone. More on this can be found in Drexler’s readings as well as David Wood’s book on Sustainable Superabundance.

In 3000 everyone will feel physically and psychologically “better than well”. Darwinian pathologies of the flesh such as fatigue, the “leaden paralysis” of chronic depressives, and bodily malaise of any kind will be inconceivable. Humanity will understand the causes of any pain and eliminate the root of all suffering.

Moreover, the advancements of sexual revolution of 60s will reach its axis with peoples realizing there is no good in feeling hurt or miserable and there is no wrong with feeling happy and content. A complete eradication of puritan ideology will leave everyone content with their body-images in virtual and basement reality alike. Humanity of the Fourth Millennium will have no issues with employing any means to ensure the completion of human’s ultimate goal, – humanity’s happiness and pleasure. Awesome robo-lovers, nights of superhuman sensual passion, 48-hour whole-body orgasms, and various sexual practices spoken of as taboos in XXI century will become the norm as long as no creature is being hurt in the process. Paradise engineering has become a full-fledged discipline.

Biological reproduction will be quite uncommon in a post-aging society. Most transhumans will originate as extra-uterine “designer babies”. The reckless genetic experimentation of sexual reproduction had long seemed irresponsible. By year 3000, the genetic lottery of Darwinian life will be completely replaced by precision-engineered sentience.

Early critics of “eugenics” and a “Brave New World” would have discovered by experience that a “Triple S” civilization of superhappiness, superlongevity and superintelligence isn’t as bad as they supposed.

There will be no place for competition or wrong translation in the Fourth Millennium. Individual traits and particularities will be preserved while the language and cultural differences will be liquidated to ensure smooth communication among all Citizens of the World, regardless of the place of birth or skin color. The whole world will be able to communicate freely in one Global Language which will enable speech as well as telepathic communication in the Universal Mind.

Routine policy decisions in basement reality have been offloaded to ultra-intelligent AI. The quasi-psychopathic relationships of Darwinian life and regular conflicts, deaths and starvations will become ancient history. The achievement of a Universal Mind being a mix of global intellect and ASI will enable world wide understanding and empathy.

In the words of Henry Wadsworth Longfellow:

“If we could read the secret history of our enemies, we should find in each man’s life sorrow and suffering enough to disarm all hostility.”

Our descendants in the Fourth Millennium will have windows into each other’s souls, thus, no more half words, misunderstandings and treacheries will be possible.

By the year 3000, some earth-shattering revelation will change all our background assumption of earlier centuries. A new way of looking at things, a new prism will be created. In fact there will exist a multitude of prisms for us to choose from, all equally right and revealing.

What will be lacking is the prism of anger, frustration, revenge, misunderstanding, hopelessness and fear. Humanity will move beyond those prisms. It simply has to.

Transhumanism Vs. Dataism: A Battle for Our Future